This album is cathartic, beautiful, harsh and breathtaking all at once. There’s also a song by Meg Myers called “Curbstomp,” that I just can’t get enough of. It’s refreshingly dark and addicting; a sparkling cocktail of musical perfection.

If you were a fan of Oasis in their heyday (and even afterward, like I was), then you will love the shit out of this album. I could listen to it on repeat over and over again and be perfectly blissful. It. Is. Outstanding. Gallagher’s much-buzzed-about so-called sub-par vocals are anything but--he nails it on every track, every time. Each song is unique and catchy in its own way, complete with a horn section and some sick guitar riffs. To every journalist who asked Gallagher about his “voice,” I will implore you to listen to some of Oasis’s live tracks when a different Gallagher, LIAM was singing. As smooth as his voice may have sounded on the album (What’s the Story) Morning Glory?, his awkward stage presence and tambourine playing was no match for Noel Gallagher’s solo act. I should know; I saw Noel Gallagher live when he came to Dallas, Texas and played at the Majestic Theatre. And he didn’t have a tambourine. Or sing off-key. Sorry, Liam.

Halsey’s Badlands…is an experience. Her breathy vocals and hypnotic lyrics will take you to a different place. Every time I listen to this album, I am transfixed. No shit.

Distort Yourself features vocals and lead guitar from Bush front man Gavin Rossdale. The songs are as hypnotic as they are hard rock. This album does not disappoint, from Bulletproof Skin all the way to the bonus tracks. If anyone ever wished for a continuation of the song “Greedy Fly,” like I did, then BUY. THIS. ALBUM. You won’t regret it.

Sorry, my Wonderwall enthusiasts. While I, too, find that song both nostalgic and amazing, this was the first offering I purchased from Oasis after I caught the music video for “D’You Know What I Mean?” on MTV one fateful afternoon. It stopped me in my tracks. I wanted Liam Gallagher’s green jacket and his impossibly cool sunglasses; I wanted to be in that video. It was such a powerful moment in my adolescence that it then spurred me on to collect all of Oasis’s import singles (which were not cheap, by the way), and changed my complete outlook on music. SO HOW ABOUT THEM APPLES?! 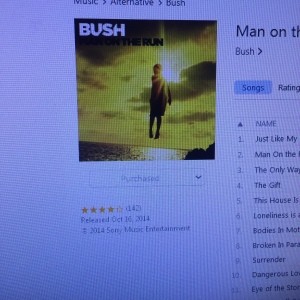 It is as ironic as it is inappropriate. Don’t let the sugary-sweet titles fool you; Martinez’s album is letting off steam in all the right ways. And she’s not afraid to say fuck.

Imagine my surprise when I Shazam-ed this song, “Way Down We Go,” expecting the Black Keys and instead got the Icelandic group, Kaleo. Otherwise a relatively unknown group, their soulful vocals and hard hitting beats have me begging for more.