Gertrude breezed past her husband as he finished a four minute census of the refrigerator’s inhabitants. “Honey, will you take out the trash? I’m late for my nose yoga class.”

She patted him on the ass. “It’s just trash and recycling. How can that ruin your whole morning?”

Dexter lugged a 48 gallon blue bin – empty except for one topless pill bottle – up his drive-way’s ten percent grade. He parked it in line with the other sixteen blue bins and started back down the driveway. A rustling from the scraggly Japanese maple that separated his yard from his neighbor’s caught his attention. Probably that crazy squirrel that stores walnuts in my exhaust pipe, he thought. He grabbed a stick and squinted for a closer look. The rustling dove behind a patch of high-rise dandelions. “Larry? Is that you?”

A bald-patch head peeked from behind the undergrowth. “You gotta help me, Dexter. I need empty two gallon milk jugs for my recycling. Three guys in suits and thick accents came to my house last week. They said they’d break my thumbs if I didn’t put out more milk jugs. I explained that I’m lactose intolerant, but they didn’t care.”

Dexter tugged at his ear. “Is the Russian mafia running the Department of Waste Management and Heroin Smuggling now?”

“Of course they are. A Russian mobster won the election for mayor last year. He promised to balance the city’s budget through off-shore gambling scams. You should pay more attention to local politics.”

Dexter waved at the phalanx of blue that lined the curb. “I think milk jugs are in bin 12. Take whatever you want. But you’re crazy to worry. The worst that could happen is a tongue-lashing from Old Lady Shoemaker for putting your tuna cans in the trash instead of bin 14.”

Larry threw open lids and snatched an armful of jugs, bottles, cans and cardboard. “If anyone asks, you never talked to me. Got it? This conversation never happened.” He popped open his own blue lids to deposit the bounty. Dexter hoofed the last three recycling bins to the curb.

A pounding on the front door roused Dexter from his couch-borne nap. He fumbled for his glasses on the coffee table, before remembering that he left them on top of the dryer. “Mr. Snugglemore? We know you’re in there. We need to have a friendly chat about your recycling.” 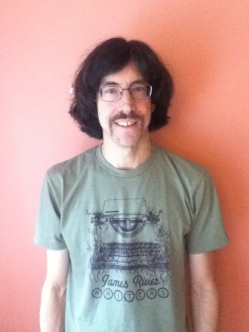 Caleb Echterling lives in Richmond, Virginia. He uses the bounty of his garden to make pickles and hot sauce, which he does not eat together. He tweets funny fiction under the clever and mysterious handle @CalebEchterling. You should definitely follow him.

4 Replies to “Trash Day on Edgewood Lane by Caleb Echterling”