At least no one has died. I tried to take comfort in these words as I tossed and turned in the dark, struggling with the latest bout of depression. I repeated the mantra when my chemically-unbalanced brain turned against me, rendering me unable to find solace in anything else. Such self-soothing left me unprepared to hear the news the following morning that my favorite musician, a man I had loved in the superficial way we are able to love celebrities, was found dead while I slept.

It was only appropriate that I heard the tragedy from my sister. Eight years my junior, she didn’t have the prerequisite of being a teenager in the 90’s, during the rise and fall of the Grunge movement. We were both adults when we went together to our first Stone Temple Pilots concert. That night she grew to understand what I saw in Scott Weiland, as she listened not only to his voice, but his lyrics. Whatever frequency Scott resonated with, we were on it, too.

We kept close tabs on his local concerts, knowing how important it was to go as often as possible. We knew with sober hearts that Scott’s clock was ticking down. After years of drug and alcohol addiction that he never seemed able to crawl out from under, we would mournfully, yet realistically, proclaim the need to see him “while we still can.”

In waking to her early morning text, which read a simple “Oh no,” and included a screen shot from the announcement that she couldn’t bring herself to type, my time ran out. Depression robs us of so much, but in that moment, I had gratitude for my ability to not feel the weight of his death, this man who spoke to my very core. I did what I needed to do to function; I pushed it out of my vision and carried on.

Time granted me a reprieve from depression, and it wasn’t long before I could return to a life without needing mantras on dark nights. However, I hadn’t unpacked Scott’s death from the dark recesses of my mind to allow myself the hurt necessary to the healing. The day a Stone Temple Pilots song came across the radio, I shut it off. “I’m not ready yet,” I explained to my husband, but recognizing the festering of the neglected wound, I understood it was time. I couldn’t keep myself from feeling him forever.

My heart heavy with emptiness, I laid my Stone Temple Pilots record on the turntable and placed the needle on my favorite song. I gave myself permission to mourn him then, a man I loved as purely and unconditionally as anyone can without knowing him. But I did know him, and somehow he knew enough of me to have the exact words I needed to hear to begin to heal from losing him. As the static scratch of the vinyl came through with his soothing voice, I realized the folly in taking comfort that no one I love had died. We all die eventually. It’s better to take comfort that we lived at all. 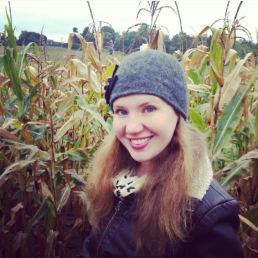 Nicole Nevermore’s love of writing began when the voices in her head grew quite entertaining and she decided to share them with others. She lives in northeast Ohio with her husband and two daughters, where she can often be found wandering forests and cemeteries looking for a good story to tell. Nicole is currently writing her first novel, a ghost story inspired by a peculiar headstone. She can be found at https://nicolenevermore.blogspot.com and http://instagram.com/nicole.nevermore.writer. She also wants you to know that that shirt looks great on you.

2 Replies to “Vinyl – by NICOLE NEVERMORE”