An Oresteia In Nashville

Athena decides to wear her aegis with her cassock but vanishes her helmet along with her spear and shield. A sphinx stands at attention at the apex of her headdress with two griffins on either side. It’s her favorite piece, really—indestructible and unarguably badass. It matches her Cloth of Gold tunic, but a goddess formerly manifested as the largest piece of indoor sculpture on Earth cannot walk around Nashville looking as if she’s on her way to a festival. The aegis, however, looks eccentric enough to pass as a tony accessory. Athena’s left hand twitches for her spear, but she holds her instincts in check and strides out of The Parthenon, following the sun, heading towards the Cumberland River.

Athena’s hiding out as a priest, and this works out because she’s still in the family business. She and her brother Apollo screwed things up a few thousand years ago with the House of Atreus and like all grief-devoured, cursed families their pain has played out over and over in an almost literary way throughout time. She can’t stop patriarchy, but she can change a few things: Orestes is not a son. This time, Iphigenia and Elektra instead have another sister.

Athena looks up at the Ryman Auditorium, strategizing about how to deal differently with Clytemnestra, when a man calls out.

“Hey sweet lady, were your parents Greek deities? ’Cause it takes two to make a goddess!”

Athena inhales the air around him; her helmet, spear, and shield shimmer. She cocks her head and assesses his myriad weaknesses. “That is not entirely accurate.”

When she turns to strut away, her robes snap and billow around her jeans; her spurs scrape and spark on Music City’s sidewalk. The Gorgon on her chest purses its lips with sympathetic irritation.

“Come on, try some of my ambrosia and bless it. I got the best food-truck in town.”

He’s an untried, whimsical mortal and wears offensively bright-colored clothing. He offers her food “on the house,” but Athena sees a metal cart on wheels, excellent for defensive use. The so-called ambrosia looks like the seared rib meat of a stout animal.

She sucks on a finger after nibbling on a bone. “This isn’t ambrosia.”

“What else you call BBQ?”

Athena knows a feast approaches. From across the river she sees Clytemnestra unfurl the cloth and then stand on the threshold to welcome vengeance. The Fates sing; Apollo is silenced. This time, the women will sort this out.

The man brightens and smiles. “How much you want?”

The Goddess of Wisdom sighs and dwells on the ravening appetites of the Furies. “Enough for a Chorus.” 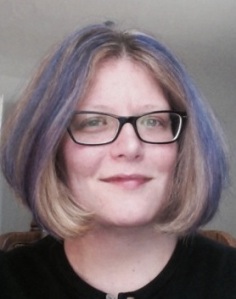 April Bradley is from Goodlettsville, Tennessee and lives with her family on the Connecticut shoreline near New Haven. Her writing has appeared or is forthcoming in Smokelong Quarterly’s “Why Flash Fiction” Series, Boston Literary Magazine, Flash Frontier, Hermeneutic Chaos Literary Magazine, The Journal of Compressed Creative Arts, Narratively, and Thrice Fiction, among others. She is the Associate Editor for Bartleby Snopes Literary Magazine and Press where she established the Women Who Flash Their Lit Series & Forum. Find her at aprilbradley.net

3 Replies to “An Oresteia In Nashville – by APRIL BRADLEY”