My Mother and Father were goo-goo sweethearts at Chicago’s Englewood High School, Home of the Eagles, The Purple and White. In their ice box days and goombah neighborhood, “Jim Paradiso’s my protector,” cautioned other guys better not mess with her lest they courted his rrrage and rrroar up close and personal, in their face, like a huge, bad-hungry, howling-bear.

They eloped right after graduation before he enlisted as a Seaman Recruit in the U.S. Navy. Packed light, my Mother boarded a heart thumping, tripleXXXpress to San Diego. Before he shipped out, they laid in at the first VACANCY sign. Needless service refilled his starch, restocked her dairy during brief breaks in their actiOn … with a CAPITAL “O.” For 72 non-stop hours, musing what to name me nine months o-u-t didn’t command his full attention or her top priority.

When he returned from service two years later, he was not the same, sweet, loving Cover Boy.  Submarine duty in the South Pacific stress-sank him.  No longer her protector, he modeled abusive drinking, concluding their divorce after countless, failed “I’m sorrys, “I won’t do it agains,”  “I still love yous.”

My Mother and I moved in with her parents, my Gram and Gramp, on the top floor of a Whew-walk up at 76th and Yates. Three stop lights from brain-freezing chocolate malts with whipped cream heads and cherry caps at Pinzur’s drug store. Two from slippery sliders at White Castle. One from double features plus Bugs Bunny, What’s up, Doc,? cartoons at the Shore Theatre.

My Father had visitation rights, and was ordered to pay child support, which he did.  Occasionally.

One visit, in particular, POPS from memory like a frosty bulb crunched in a vintage flash-camera. Buzzer-buzzzzing, I peek around the corner, spy my Gramp guard-gait the hall and catch his chilly, “Hi, Jim,” the way I’d greet the dentist. Then, “Jimmie, your Father’s here to take you out.”

We share hazel eyes, lady lashes, same names. That’s pretty much all we have in common. What we’ll do, where he’ll take me, how I’ll feel, are divined in a faded, black and white, 3×5 inch photo I’ll uncover 60 years later. Cradled in a timeworn, bulging, Alper-Richman Furs’ box, labeled “Family pict…+ clo… friends,” in my Gram’s best, as she would say, “chicken scratch.”

The photo shows me propped on a huge, stuffed, expresso-colored Grizzly at the Lincoln Park Zoo. Wearing a what-cha-ma-call-it, South-of-the-border, hat with starry tassels, a galaxy of tassels, dancing all around its two-tone brim, I look light years from Venus about the zoo, the bear and especially… the hat.

“We’re going somewhere special,” he says.  “Introduce you to my friends.  Show you off. You’ll like it.”

Perched on a stool with my new KEDS dangling mid-air, I meet my Father’s buddies at a shot-and-a-beer- for-a-dollar dive on Canal Street in a stone-washed part of town way before stone-wash fashions Rush Street chic-chic.  What are their names, Jack Daniels and Johnny Walker and…?

I feel (How can I describe it?) alien, derailed, bare-ass, homeless, hooky-spooks, pants-peed-creepy. Like a squirrel monkey posing for a Picasso portrait among stale paints, haggard brushes, thirsty canvass. 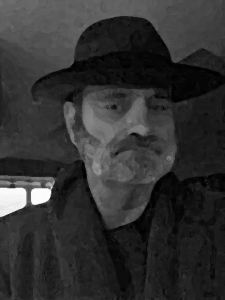 J. Ray Paradiso is a recovering academic in the process of refreshing himself as a writer and photographer.

One Reply to “Somewhere Special – by J. Ray Paradiso”