It was after the toilet scrubber was delivered that she saw them.  It was dark, save for the security lights, and Paula rarely went out at night to collect her online shopping deliveries.  But she’d been trying to find space for the cat tree, the Christmas ornaments, the sea salt, and the egg beaters.  And the attempted organization of her innumerable Internet purchases had left her so exhausted that she’d simply collapsed and fallen asleep for hours.  She’d considered waiting until the next day to open the front door and grab the package, but she’d seen a TV special on no-gooders who stole deliveries right from doorsteps, and she did not want to risk that the scrubber wouldn’t be there in the morning.

Paula ordered everything online.  She’d learned long ago, when she’d purchased her first book on the Internet, that the magic of placing an order without having to interact with another human being was one hundred percent priceless.  Other people drove her crazy.  They wanted to chitchat and make empty compliments and ask about her day.  Other people were a distraction and a detriment and an all around bother.  And – truth be told – she was terrified of them.

And so it was, with the rush of euphoria Paula felt when a crisp copy of 1984 arrived on her doorstep, that she made the World Wide Web her one and only source for trinkets, electronics, shoes, groceries, furniture, toothpaste, and — well, the list was endless.  One needn’t ever leave the comforts of home, and indeed Paula did not.  Oh she’d lost friends of course.  All of them.  Even her mother stopped making the arduous trip to Paula’s isolated cottage.  Mother had grown tired of slipping her frail body between the stacks of boxes and rolls of gift wrap and cartons of scented candles, just to find a few precious inches of space where she could rest her bones.  Then Paula and Mother would chitchat (uch!) about stupid things until Mother would inevitably turn the conversation to mental illness and psychiatry and oh they have so many wonderful drugs these days.  Unfortunately, Paula would say, none of those drugs could take her back in time to live a healthy childhood.  Zing!

So what of the toilet scrubber?  It was out there, so close, begging Paula to open the door.  My God, if she could grab it, she could clean the toilet RIGHT NOW.  This was the very definition of agony, and Paula wondered if it was a punishment, if it was karma, if she’d somehow offended God.  She had a box of porcelain Jesuses somewhere, but she’d forgotten where she’d put them and oh shit, had she put something on top of them and they’d shattered into Jesus dust and now Jesus was sore?

Stop it, Paula.  Focus on the box.  The toilet scrubber.  We need it.  We need that awesome scrubber!

“But those things out there.”

They’re not things, Paula.  You know what they are.

“Dead!  There are dead legs sticking out of the ground, and oh dusty Jesus, someone’s been buried upside down in my own front yard!”

“Why is he buried only halfway?”

“The khakis, the sneakers.  Those are men’s clothes.”

Until I see a face, I don’t judge.

“I have to do something.  I have to find a shovel.  Where are my shovels?  Oh no no no, what if I dig him up and he’s alive and he wants to talk?”

Know what I see?  A toilet scrubber that’s gonna change your life.

Paula leaned against the door, pressing her forehead to the wood.  She took deep breaths.  In through her nose, out through her mouth, like they taught her in the hospital.

She was hallucinating.  She must be.  She hadn’t had any Schnapps in hours and this was just withdrawals.  She could easily grab the scrubber and shrink back into the house.  Tomorrow morning the legs would be gone.

“What if the police come?  They’ll think I murdered a man.  I’ll go to prison, and oh God, there are so many people in prison, people who love to talk, and you know I’ll want to keep all the little plastic spoons and the applesauce containers and things from the laundry, but they won’t let me and I’ll go mad.”

No.  No, she couldn’t allow that.  She had to do something.

Cut off the legs.

Sever them where they meet the ground.  Plant daisies in the holes.

“What if he’s someone’s husband?  Or son?  They’ll come looking for him.”

Why would anyone’s husband or son come here?

“He means something to someone.  They’ll come looking.  They’ll ask questions.  They’ll want to talk.  And they’ll say, my those daisies look freshly planted and — ”

No one cares about a man stuck head first in the ground.  He’s a nobody.  He means nothing to no one and no one will come.  Maybe he’s a house burglar, ever thought of that?  Maybe he did us a favor and had a heart attack and died before he could steal your things.  Your things, Paula.  He wanted to take your things.

“If he had a heart attack, how’d he end up half buried?”

I don’t have all the answers.  Now get a chainsaw.

“All I’ve got are knives.  Lots and lots of knives.”

They won’t cut through bone.

“Who else comes here with a name tag?”

Paula stormed away from the window.  She climbed over a mountain of bubble wrap and handbags and photographs and office supplies until she tumbled down the other side.  She entered the bathroom and lifted the toilet lid.

You need that scrubber.

“I need that scrubber.”

For what?  He already made his delivery.

Paula hauled herself back over the mountain, then crawled on all fours to the front window.  She peeked over the sill.  A man was on the stoop — wearing khakis and an ID tag clipped to his shirt.  But he wasn’t covered in dirt.  This was someone else.

Paula looked out at the garden.  Indeed, the legs were gone.  Only the tag remained.

He won’t go away.

He’s looking for his colleague.  He’ll go to the police.

Outside, the man picked up the package and examined it.  He put it back on the stoop, then stepped over to the window.  Paula made herself as small as possible.  She realized how much she had to pee.

Paula snuck a peek.  Relief washed over her.  The man was walking toward the gate.  She’d been spared a confrontation, at least for now.

Then the man stopped.  He knelt and picked up the ID tag.  Examined it.  Looked back at the house.  And moments later —

Paula fought back tears.  She pulled herself to her feet and peered through the eyehole.

“Ma’am, I’m looking for my employee.  Brett.  Now, he delivered this box to your home hours ago and this was his last stop.  Found his ID card right over — ”

“It fell off!  Maybe it fell right off and he didn’t notice!”

“Thing is…his family hasn’t heard from him either.”

“Ma’am, will you please open the door?”

“I don’t even know where the coffee is.  Or the tea.  Or anything else.”

“I thought you said you took a shower.”

Paula was silent.  Leonard shook his head.  He walked around the garden, looking for other signs of Brett.  But the earth had swallowed Brett whole.  There was nothing left of him.  And he wasn’t coming back.

Leonard returned to the door.  “All right, ma’am, you give me no choice but to contact the authorities.  I’ll be back and a whole lot of people will be with me.  And they won’t give a damn whether you’re naked or not.  They’ll bust right in.”

A whole lot of people?  Bust right in?  Oh no.  Oh no, that wouldn’t do at all.  Paula would die.  She’d suffocate under the talking and the scrutiny and the talking.  Sweet dusty Jesus, what should she do?

That’s when it happened.

As Leonard made his way to the gate, Paula could swear she saw the ground move.  The soil rippled and rolled back like a receding wave.  Leonard dropped into a hole right up to his waist.  Then the ground rippled again, and the wave came in, and Leonard was helpless in its clutches.  He might as well have been standing in cement.  No — quicksand, Paula thought.  Quicksand does that.

The more Leonard struggled, the deeper he sank, pulled down into the hole as if there were someone in a topsy-turvy underground world, tugging Leonard into a hell of roots and bugs and darkness.  Paula could swear he was crying.  Then he screamed.  But no one would hear him.  Not out here.  Not in this place.  Not this far from all the chitchat.

Once Leonard was up to his chin in dirt, everything came to a standstill.  Leonard’s head looked like just another gourd in the garden, as if it were planted there, perhaps to greet guests as they came through the gate.  Paula chortled.  Guests?  Ha!

Paula swallowed.  “I should do something.”

“I have to go outside.  I can’t pretend he’s not there.  I can’t listen to him scream all night.”

Paula put her hand on the doorknob.  She shut her eyes.  The knob rattled in her palm.

You can’t help him.

Paula twisted the knob, threw the door open, and rushed into the dark, almost tripping on her new toilet scrubber.  She ran without thinking and she reached Leonard’s head and she looked down at the man.  This tearful, frightened man who was so firm with her only moments ago.

Paula dropped to her knees.

Paula placed her hands on Leonard’s head, took a deep breath — in through her nose, out through her mouth, like they taught her in the hospital — and pushed.

Paula surveyed the garden.  Then she looked up and down the narrow road that led to her home.  Just in case.  Just in case this was the miraculous night when a passerby saw her pushing a man deep into the earth.  But of course there was no one.  She was alone.  Gloriously alone.

And there was a toilet that needed scrubbing. 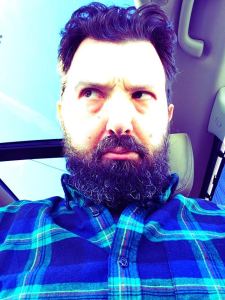 Amiel Rossin lives in Los Angeles with his wife and son and a box of assorted pastries.  He holds a BA in Theater, an MFA in Screenwriting, and a PhD in Lookin’ Good.  Connect on Twitter @amielrossin or via email at amielrossin@gmail.com.