With all my girlish excitement bubbling up inside of me at the thought of FINALLY seeing a lifelong musical idol of mine, former Oasis founder, mastermind, lead guitarist, back-up and sometimes lead vocalist, Noel Gallagher, I was….giddy. I know, I know.

Right after my family had moved to Wichita Falls, Texas (Sheppard AFB), where my dad’s next assignment was as a flight instructor in the US Air Force, was when I discovered my love of all things Oasis. After dissecting a thrilling article on the band from an issue of SPIN magazine in 1998, where the brothers Gallagher professed their fondness for Adidas shoes, shirts, pants, hats, etc, I decided that I, too, needed a lot of Adidas things.

So, in true super-fan mode, I wore the shoes, packed my purse full of ALL those import singles and crossed my fingers in the hopes that I’d get a few signatures. (We didn’t get any–he’d had a flight immediately after the show.) 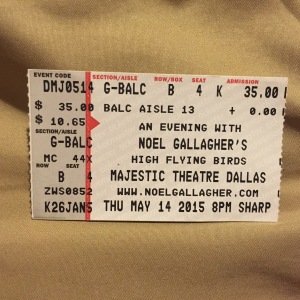 But nevertheless, the show was spot-on. Gallagher sounded as good live as he did on his LP and I sang along to every word. He even did a couple of old Oasis songs at the end of his set, one being “Digsy’s Dinner” from the band’s first LP, Definitely Maybe, which was first released in the US in 1994. I high-fived a fellow concert-goer who seemed to be the only other person besides me on the balcony who knew the words to Digsy’s Dinner–right after that, he spilled a full cup of beer over the balcony. Although raucous and drunk, his group was fun to cheer with. And to our immediate right sat an addled pre-teen and an angry looking adult. 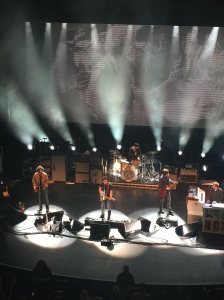 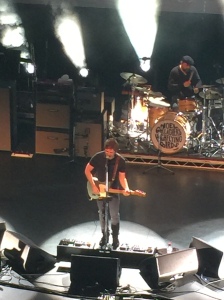 At the end of the show, Gallagher spoke into the microphone with his Manchester accent particularly thick that evening (After everything Noel said, my husband kept asking me, “What did he say?!”), “I’m not gonna lie; it’ll be a very, very long time before I’ll be back this way.”

It made my heart sink a little. But on the off-chance that he does decide to come back to the Dallas/Fort Worth area, I’ll still be wearing these:

And I’ll shove all of these in my purse again: 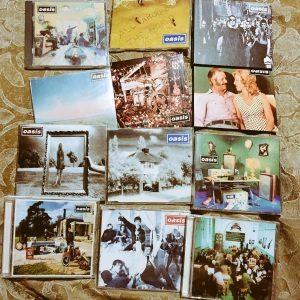