It started with her name.

She gave it up quite willingly; exchanged her father’s for her lover’s at the altar.  Standing there in an ivory dress and her grandmother’s pearls, she had felt a tiny snap as a bit of her broke off, but nobody else seemed to notice.

Just a tiny freckle, or a finger nail, not enough for anyone to notice.

With each child she birthed – three in total – she felt a little bit more slip away.  She was beginning to notice the gaps now, the lack of an earlobe; the loss of a tooth.  Each time she was referred to as ‘Matthew’s Mum,’ more flesh shriveled.  She kept looking around her to check if anyone else had noticed, but nobody seemed to.

Some days, in the fog of packed lunches and dirty football kits, she struggled to recall her own name – so long it had been since anyone had used it.

And yet, it was such a pretty name, if anyone cared enough to remember it.

Even her husband, grown grey at the temples and stressed around the eye sockets, didn’t use it often.  In company, she was dear, or darling, or simply: she.

In bed, he favoured other names – or none at all.  She would have liked him to use her name then – especially then – to whisper it as he had before, back when she was a whole person.  A full, energetic, sensual woman with a name and a job title and a purpose.

Now she had other names too big to fill: Mother; Wife; Homemaker.  She felt she had lost her own identity, had become a cardboard cut-out of a person; invisible.

It was with mounting horror that she looked into the hall mirror one hot Sunday afternoon in June to see a gap down her right side, where her arm had been.  Her short-sleeved top just hung, the sleeve pointing out away from her shoulder.  A rounded shoulder blade stump poked out of it, like the nose of a cartoon dog.

She walked out into the garden and poured from the jug of homemade lemonade, awkwardly, using her weaker left arm.  She glanced around the table, but none of them appeared to notice the missing limb.

Matthew played Tetris on his tablet; Sophie texted, fingers furiously tapping the keys of her mobile.  Tim, the youngest, grumbled that he had not been picked for the football team.  Her husband read the sports page of the newspaper.

Simon…she started, unsure where to end.  He glanced up from the paper, slight irritation etched across his face.  Do you notice anything different – about me, I mean?

He flicked empty eyes down and back up so quickly she hardly saw them move.  A tiny smile, indulgent, the way he looked at the children when they gave him a homemade birthday card.

She excused herself to get more lemonade.  Nobody thanked her.

As she walked through the warm house to the kitchen, her left foot faded out and she imagined she felt a tiny piece of her heart disintegrate inside her chest. 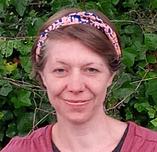 ***Kate is a freelance writer based in the UK who writes articles, including regular contributions to online women’s magazine Skirt Collective, as well as publishing life writing and poetry both in print and online.  She has a passion for flash fiction and short stories, and is usually found lurking around coffee shops, writing and listening to other people’s conversations. Jones has also become a regular contributor to Sick Lit Magazine, and is a 2016 nominee for the Pushcart Prize through Sick Lit Magazine.***