Three days before the last time, she took me to the hairdressers for a trim. We didn’t go to our usual salon. She asks too many questions, she told me, when I asked why. We went to a new one down the road.

Just a trim, she said to a young girl with short, shocking blue hair which hung over one eye but was completely shaved on the other side.

The girl tried to make conversation with my mother at first, all the usual topics in the hairdressers’ toolbox. Holidays. Work. The Weather. My mother continued to flick through the hairstyle magazines without looking up until the girl gave in and started on me. She asked about school. I answered her politely.

When she finished the cut, my mother came over to inspect. She has her father’s nose, she said to no one in particular, as I stared out of the mirror at her. It sounded like an accusation.

Two days before my mother left, she drove me to ballet class. After she turned off the engine, she grabbed my arm as I was about to pull open the car door. For a minute, she didn’t speak.  Just sat there, holding my arm. Do you enjoy ballet?  She asked, like a stranger, like we’d never met.

Um, I guess so, I said. She looked at me, like she was trying to decide something. Then she let go of my arm. Don’t do things just to please others, she said, then turned back to the windscreen. She started up the engine, signalling my exit. I opened the door, shouting ‘bye over my shoulder.

The day before my mother left, she dropped me off at my best friend Sally’s house for a sleepover. She hauled my sleeping bag from the boot of the car and handed it to me, coming forward for a hug which lasted just a fraction too long. She let go awkwardly. She was never one for overt shows of affection.

Have fun and be safe, she said, and walked back to the car.

I ran into my friend’s house without a backward glance. I don’t know if she sat in the car a while after I went in or whether she drove straight off to her new life. I only know I never saw her again.

Maybe I’d have taken more notice, if I’d known it was the last time. 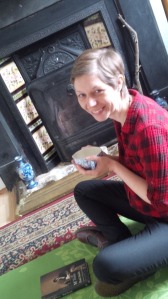 Kate Jones is a freelance writer based in the UK.  A regular writer forSkirt Collective, she also writes features and reviews for The State of the Arts.  She has also published flash fiction and poetry in various literary magazines, including Sick Lit, Gold Dust, and 101words.  She has been long-listed for Flash 500, and won the weekly AdHoc Fictioncontest, as well as being nominated for a Pushcart Prize.

She also blogs at: writerinresidenceblog.wordpress.com

2 Replies to “The Last Time – by KATE JONES”