came out of the bookstore onto Alvarado by the bus plaza.

some paintings by woody guthrie were on the cover.

i couldn’t read it. i was too crazy.

the guys in the bookshop were laid back and friendly. we’d talked a little.

the kid’d been sorting books, pulling them out of boxes.

he’d asked the older one who isadora duncan was. there was an old autobiography.

the old guy said he couldn’t remember. “he’ll know,” he said, referring to me.

i don’t know why he said it, but he was right, so i told them who she was.

then i went out and walked. i had to hurry.

i had to tell everybody the big news.

i felt mad with it.

i stopped outside a restaurant. people were eating on the patio.

good a place as any. i had to tell everybody about my baby.

tell the truth, i was kind of dizzy. too much excitement all at once.

i felt like my whole body was vibrating. sizzling. i was infused with light.

they were just stuffing their faces and staring at their phones.

i had to wake them before they faded into nothing, there wasn’t much time left for them. they were killing themselves with gluten and sulfites. the phones were frying their eyeballs. they sat there talking too much and saying nothing.

well, i was going to talk. and i was gonna say something.

i was gonna scream it at them.

i leaned over the patio’s iron railing.

i told the nearest tables, “Hey! Hey! Michelle said she loves me!”

they looked at me like there was something wrong with me.

there was a table with the menu in chalk on a big wooden board.

so i jumped right up on it. i had to tell them. i was on fire inside.

the whole world needed to know it. they were all in the dark.

and i had light in my veins.

i had to slap them upside the head with truth!

they didn’t know anything!

i was sort of off-balance.  i almost fell.

i dropped the paris review right in some cat’s gnocchi.

he could keep it. it wasn’t anything. she wasn’t in it.

“i’m showing you what i was hiding in my back pocket, you fools!”

i could hear myself screaming it, but like i was in a deep, deep well.

she does that to me.

monday i almost drove off a cliff, into a reservoir.

tuesday i backed into a planter box.

wednesday i put my shirt on inside-out.

thursday i forgot my own name.

and friday i hit myself in the face with a donut.

she does it to me.

she even made me forget i was writing a poem right now.

it all blends together, people. wake up!

ok, back to my story.

i was yelling at the patio people.

“i’m showing you what i was hiding in my back pocket, you fools!”

the whole patio thought i was nuts.

the manager was trying to shove me away and down the sidewalk.

but i was too quick for him. i’m quick when i’m insane.

they try to cover up the parts of you they don’t like.

after a while all the parts are covered, inside and out.

you can’t let them do it.

don’t let them hide you from the sun.

the manager said he was calling the cops.

i started haranguing the patio again.

lucy brown is in the basement there!”

only her eyes and voice mattered. and her. just her.

her voice weaved down the hotel hallway. it echoed softly. it was a song. it poured over the carpet through the green and yellow light. it sauntered. it skipped. it bumped into the wall.

they needed to hear it.

she’s the best show on. it happens in subterranea. she blew my mind! its still blown!

i was out of breath. the people on the patio were doing their best to pretend that i didn’t exist. but i kept talking. bearing witness. they didn’t understand love.

she’s got something. since i saw her, i walk weird.

the least motion, the crazy wave of her hand. the suddenly tender face.

they all hit me right in the gut.

she has a tree nailed to her wall. she has kale! her voice goes everywhere . . .

it dances up the wall, runs up your leg, kicks you in the gut like a mule,

then it strokes your face so softly, like a swallow swooping back and forth,

barely brushing your cheek with its downy belly.

then she trips over her own feet.

she has pandora. she’s a blue fire in the snow.

when she leaves a room the colors are gone.

colors come off her and stick to your mind forever.

that flash of blue. right out of your own dreams.

when she looks at you you know what you are.

its not easy to take.

its an unaccustomed sensation.

it is a deep current. her eyes wake it in you.

it is something from our deepest core.

it is where we all came from.

before so many things happened.

before we got wrong ideas.

before we became liars and cowards and brutes.

before we lost our colors and faded.

before we became cardboard.

before we learned to hate.

before we knew doubt. back from when we flew like birds.

she looks you in the eyes and you remember yourself.

you remember who you are.

you see who she is.

it hurts but it has to happen.

you come out of your own stomach.

if you can see her, really see her,

you give birth to yourself.

nobody else has eyes that can do that.

this is a beautiful and pure truth.

i walked so far to find her but she found me

i knew she was coming ’cause the trees were brighter.

i started yelling at the patio people again,

my voice was coming back.

listen! this is who i am! look at me!

i need to get there!

i had to tell you about her first, i had to try!

you dont understand. you have to love.

your mirrors are warped. they make small things look big,

and the big things invisible.

a bad hour lasts forever. cause you look at it wrong.

we really wont be here long. realize this. you have to love.

in the soft light.

so many black nights. cold and resentful.

so many bad memories, sliding by one after the other,

so many things better forgotten.

i looked so long for you, Michelle.

everything was so windy and so quiet and so sad.

then you came to me.

i told the guy i was sorry about his gnocchi,

told him to keep the paris review.

told everybody i had to get to reno.

i had to kiss her.

i had to hold her.

because I am her man.

and its her birthday. 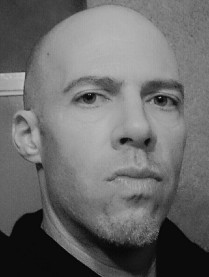 Sean Ferreira lives in Monterey, California. After having circumambulating the block, our shabby hero reversed direction. He took a closer look at the block, and he scribbled down what struck him as worth scribbling. He likes Dylan, and Coltrane’s crazier stuff. He thinks the novel Suttree is the best big work of art since Picasso was in his stride. He almost never has an original thought. He likes Mexican women. He likes blonde women. He likes women who reside in the dark. He likes hot sun, scrub jays, cool sheets, crows, Tony Coturri’s zins, Gary Pisoni’s pinots, hummingbirds, poetry, Sean Thackrey’s crazy blends, mockingbirds, and life, in all its astonishingly beautiful expressions.