‘Kate, not everybody in Texas owns a shot-gun, you watch too much TV,’ Kelly says.

She starts fiddling around, re-arranging perfectly arranged cushions on the sofa, pushing her kids’ toys out of the way. She invites the Gallagher brothers to sit.

To be fair, they’d taken the change in time frame and location, from a dank Manchester evening into a bright fall day in Austin in their stride, bumpy landing into Kelly’s living room and all. They shrugged coolly and sat down on the sofa beside one another.

‘Make yourselves at home, guys!’ Kelly gushes, fussing around them.  She beams prettily.  She’s in her element here.  ‘Wow! I can’t believe I have the actual Gallagher brothers in my living room!’ she whispers.

Gee rolls her eyes at Kate and Jamie.

‘Huh, so, like what are we supposed to do with them now we have them here?’ Gee says, fidgeting with her handbag.

The friends look at one another.  Liam is stroking the giant TV screen admiringly, like it’s a portal to another universe.  Noel is perfecting a nonchalant expression, black thick eyebrows knitted together.

‘Shoot some pool?’ Jamie offers helpfully. They look at him.

‘Jamie, you don’t bring the Gallagher brothers all the way to Texas in 2016 to play friggin’ pool with them,’ Kelly snaps.

‘So what do you do with them then?’ Gee asks.

‘Get them to play music, of course,’ Kelly says, dashing out of the room and returning seconds later with an old wooden guitar.  She hands it proudly to Noel, who takes it from her, turning it over, plucking at a couple of strings to test its sound.

‘You can jam, guys,’ Kelly says, ‘right here in my living room.  A private concert!’  She’s beaming.  Gee and Kate exchange looks.  They know how much this means to Kelly, she’s been, like, their biggest fan since forever.

The Gallagher brothers glance at one another.  ‘Got any beer, then? Wait, I thought you were from Manchester?’ Liam says to Kelly.

‘Oh, God, yeah, sorry. Where are my manners?  I’ll just go get you some,’ she says as she runs off toward the kitchen, ignoring the Manchester question.  The rest of them sit down on the floor.  Noel starts strumming the guitar strings and a familiar rift comes out.  Liam starts nodding his head to it, closing his eyes, losing himself in the rhythm.  The others tap their feet politely, trying to place the tune.  Wonderwall?  She’s Electric?  Champagne Supernova….?

Kelly comes back with two bottles of beer, hands them to the boys.  ‘Where’s ours, like?’  Jamie asks.  She just glares at him and sits down on the floor, staring back adoringly at the brothers.

‘What was that tune you were playing?’ Gee asks, frowning, ‘I kind of recognise it but…’

‘Oh, it’s one of our favourites, we always do it down the local on Saturdays at the karaoke night,’ Noel says enthusiastically.  ‘Sing it bro,’ he says to Liam.

Liam takes a swig of beer, then clears his throat and starts to sing.  The room goes quiet apart from those recognisable tones, singing….Waterloo???

‘Abba???’ Jamie says, out loud, before smacking his palm against his forehead.

The boys stop.  ‘What?  They wrote some great, happy songs, man,’ Noel says.

‘No no no no no….,’ Kelly says, pushing herself off the floor and crossing the room to the CD player.  She finds the right CD and before long, the first notes of Wonderwall are drifting melodically out of the speakers.  Pure Oasis.  The brothers look at one another, puzzled looks on their faces.

‘But it’s so…miserable,’ Liam says, taking another drink of beer.

‘Yeah, we like a happy beat,’ Liam says, ‘something you can dance to.’

The group exchange awkward looks as the strains of Wonderwall play out.

‘No, look,’ Kate says, ‘you’re supposed to hate each other, that’s where all your passion comes from.  You feed off of one another, and Liam, you hate all the fans, too.  You’re deliberately rude and deprecating to them.  You swear a lot.  It’s what makes you you.’

‘Hey, listen to her, guys,’ Jamie pipes up, ‘she writes some really serious stuff, she knows what she’s talking about here’.

Kate whacks him on the arm. Hard.

‘Jesus Christ…,’ Gee says.  Kelly looks on the verge of tears, her childhood fantasies in tatters.

‘Hey, don’t I know you?’ Liam says suddenly to Kate.

‘Yeah, I’m sure I seen you before.  Down the Hacienda, last New Year.  You were that bird what fell off the table, smashed that Diamond Blush bottle over a bouncer’s head and got thrown out,’ he says.

‘Me?? Ha! No, no, you have the wrong person,’ Kate says quickly, ‘a lot of people look like me, I’m often getting mistaken for other people…’

Gee, Jamie and Kelly are looking at her strangely.

‘Older,’ Kate finished for him.  ‘Older is the word you’re groping for.’

‘Yeah, that must be it,’ Kate says, folding her arms huffily against her chest and looking away from the gaze of the others.

‘You were at the Hacienda?’ Gee says, a hint of awe in her voice.

‘Dancing on the tables….?’ Jamie says, ‘I thought you spent your youth wandering the moors, deconstructing the work of Emily Bronte?’

‘Ow! Will you stop doing that?!’ Jamie winces and frowns at Kate.

They stop arguing when they notice Kelly’s stricken face.  She looks totally crestfallen.

‘Hey, I’ve got an idea,’ Kate says, getting to her feet.  ‘We need them to hate each other, right?  They need to fight and find all that passion to write their songs.  So, let’s give them a reason to fight.’

She walks across to the sofa, perches on the arm beside Liam, who is humming along to Noel’s strumming of Dancing Queen.  She leans in a bit, so only he can hear.  He looks at her from the corner of his eyes.

‘Hey Liam,’ she whispers, ‘you know that night at the Hacienda, when I….I mean, my younger sister, was dancing?  Well, she told me she saw Noel making out with your bird while you were out of it.   Just thought you ought to know.’

She walks back to the others, who stare at her quizzically.  Before they can ask what she said, Liam is on his feet, whacking Noel over the head with the guitar.  Insults start flying; Noel lays a punch on Liam’s chin.

Kate smiles.  ‘I don’t think it’ll be long ‘til they start writing some proper sweet music,’ she says.  The others laugh.

‘Just one question, guys,’ Kelly says, wincing as Liam knocks Noel into a lamp on the side table, ‘how we gonna get them back to Manchester 1990 before the kids get back from school?’

‘I think I’ve got yer answer, ladies. Oh, and Gallaghers,’ says Jamie, holding up his iPhone, which is flashing like mad as the house shakes rumbles.

‘For what?’ the brothers Gallagher ask.

‘Who the fuck knows?’ Kate says, bracing herself against the wall and closing her eyes. 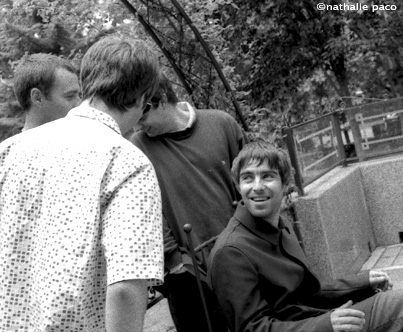 Kate Jones is a frequent contributor to Sick Lit Magazine and a helpful time-travel companion when dealing with the brothers Gallagher. Though they aren’t speaking right now – and haven’t been for some time – we want to put our memories of their music into a bit of a “time capsule” if you will and have some bloody fun with it. (Sorry, Kate, I’m sort of speaking for you!) Kate is also one of Sick Lit Magazine’s Pushcart Prize nominees for 2017. GO KATE!! AND, STAY TUNED FOR OUR NEXT INSTALLMENT OF….SLM MEETS OASIS!