I hadn’t come out

What will be left behind?

found on either side

Smell of the human flesh.

that no one can

that bear the marks of

that bear the marks of

everything once one owned;

relationships that were built and

the connection to the land;

the land of our ancestors;

the land that birthed them;

the land where we buried,

laid them to peace,

all of these memories and

When each one of us

all of these things

Let’s leave them behind and

in the other world

This poem was written keeping the Partition of Punjab/India in mind. My parents are the children of Partition. Partition that was responsible for causing the greatest transmigration in the history of humankind. When the Partition happened, both my maternal and paternal grandparents and their families became what’s commonly referred as the ‘stateless people’ overnight. This poem is dedicated to Punjab. This poem is dedicated to all the children of Partition. To all the stateless people. To all the people on both sides of the border. To the people of India, Pakistan and beyond.

My Uncle tells me when the calls

for Partition filled the anxious air,

everything was up for partition,

not just the land.

Everything was to be partitioned.

On a railways platform,

could be heard as fleeing refugees

searched through their ragged pockets

to fish out a few coins in exchange for water.

The journey was long. Not everyone

made it to the other side

Those who did had their thirst quenched

but what about the water? What quenched its thirst?

If water could speak,

it would confess its thirst.

Its thirst for peace.

Thirst for to leave it

I get asked wherever I go.

I pause for a while and

start all over again

Some of us have been on the road

with no memory of the name of the place

we first began our journey from.

The rising flames of the Partition

burnt many memories. Burnt them to ashes.

Burnt them to the ground.

Ashes is now all that remains.

A handful of these ashes

from on an urn of lost history

is what I offer

each time you ask

I lost my grandfather

when I was only nine months old

so I don’t have much memory of him.

But I do have several memories of my grandmother

as she was around for many of my growing years.

She was fiercely independent.

A strong and phenomenal woman.

My uncles and aunts say that I

remind them of her.

This is to say that I kind of

There was something else

that kept her memory alive.

Her handwritten letters to

my grandfather that she wrote

when he was working away

early in their marriage.

Both my grandparents exchanged

letters in Urdu – the language of love,

When the calls for Partition echoed,

turned into an empty house.

A soon-to-be abandoned place – the walls of which

stored the last echoes of my grandparents’ cries.

When they fled West Punjab, and

came to Delhi, they brought

those letters with them.

Luckily, those letters had survived.

They had escaped being

stained with blood, unlike

millions of other people, who

were not so lucky.

I was always intrigued by those letters

that my Grandma kept locked in her almirah.

I wanted to see those dancing letters

of my grandparents’ love language – Urdu.

Even if I could not read anything.

(It only two generations to make people estrange)

I wanted to hear the crispy sound

of those pages when being turned.

I wanted to feel the dried ink

resting on those pages

before they ran the risk

of getting smeared all over

by the red ink of Partition.

I wanted to smell those letters

which still carried with them

the scent of the golden wheat fields

of the land my grandparents left behind,

the land I can never return to – the land

that is now on the other side of the border.

But I could not do any of this.

I never saw those letters.

I never held them in my hands.

They existed and yet

When my Grandma passed away,

she took those letters with her.

She did not want others to read them.

On the banks of the holy river Ganga,

her ashes merged with the waters,

as did those letters

that slowly floated away.

Perhaps, merging on the way,

with countless other such love letters,

from across the border,

hiding away, stuffed at the back of a wardrobe.

under a pile of disaster rubble.

Like precious treasures buried in the backyard by a refugee

before they eventually have to flee.

These floated away, buried stories

of the many women – when will they be heard?

When will the smell of their stories

When will their stories get dug

out of the rubble

so they could bear witness

to the past and present.

Let the bloody stench of their stories

gag you a little.

Let the secrets be unburied.

Let the demons of these women’s lives

haunt you a little. 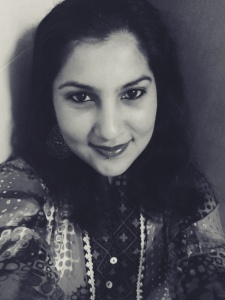 Prerna Bakshi is a sociolinguist, writer, translator and activist of Indian origin, presently based in Macao. Her work has previously been published in over three dozen journals and magazines, most recently in Silver Birch Press, Wilderness House Literary Review, Kabul Press, Misfit Magazine, Peril magazine: Asian-Australian Arts & Culture and Wordgathering: A Journal of Disability Poetry and Literature. Her full-length poetry collection, Burnt Rotis, With Love, that was recently long-listed for the Erbacce-Press Poetry Award in the UK, is forthcoming from Les Éditions du Zaporogue (Denmark) later this year. She tweets at @bprerna

***What will be left behind?, Thirst, A recurring question, My grandparents’ letters and Gone and Buried are based on the theme of Partition (and on refugees) during India’s independence struggle from British colonialism. The Partition of Punjab/India was responsible for the deaths and displacement of millions of people across South Asia. These poems are deeply personal (as much as political) as my family, just like several others, was directly affected by it, and I hope that these poems could offer a little bit of insight to those who may not be familiar with this very significant part of history.****