Marilla walked in blue shadows. Before her, the glacier towered in chill heights. The air felt like waiting wind. The snow breathed silence. She huddled into her furs. The blue glaciers were once skies, but when coldness had cloaked the world, they’d frozen and sank. She picked up a small piece of the blue ice – it fit in her palm. She held it to her eye, peered through and saw the long ago views from the ancient skies – lost lands and seas.

About her, snow fell and wind widened but she only saw the vanished world. Through the ice, she watched warm lands flowing beneath gone away skies: rivers and forests, mountains and plains. The piece of ice began to melt and in it she watched day thicken into dusk. She stood still in the pale morning while she followed flocks of strange birds on the night winds.

The ice shrank between her fingers. She saw lakes blooming with reflections of unknown stars. She watched the old world until the piece of ice was gone. The snow had stopped falling. She forgot the lands seen through the blue ice. She trekked home. Only when the snow fell did she remember the vanished world beneath the old skies. 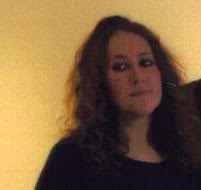 Rebecca Harrison sneezes like Donald Duck and can be summoned by a cake signal in the sky. Her best friend is a dog who can count. Through the WoMentoring Project, she was chosen by Kirsty Logan as her mentee. Rebecca’s been nominated for Best of the Net, and her stories can also be read at Paper Darts, Maudlin House, The Wild Hunt, and elsewhere.

One Reply to “The Frozen Sky – by Rebecca Harrison”